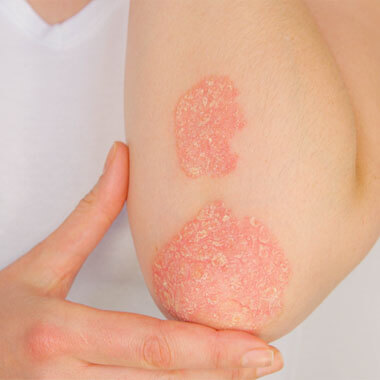 Psoriasis happens when skin cells renew themselves too quickly. It usually takes up to 28 days for newly formed skin cells to rise to the surface of the skin and separate from healthy tissue, but in psoriasis it takes just two to six days.

There are several different forms of psoriasis but usually it appears as red scaling patches which, when scraped or scratched, show fine silvery scales. Theses patches may affect just a few small areas of the body or they may be very extensive. Psoriasis is most common on the knees, elbows and scalp, but can appear anywhere on the body.

There are many types of psoriasis including Guttate, Plaque, Pustular, Psoriatic Arthritis and Flexural Psoriasis which can affect most areas of the body including the Scalp, Nails, both fingernails and toenails.

Psoriasis is a condition which runs in families, but the exact way in which the disease moves from generation to generation has not yet been established. Exposure to certain stimuli (such as a streptococcal infection in the throat, alcohol, medicines and local irritation) or damage to the skin, may cause an outbreak of psoriasis in persons who have this genetic predisposition.

The condition is chronic, lasting for many years. Most people have periods when symptoms are minimal or the skin is normal but then it flares up again. Psoriasis is an upsetting condition because it can be uncomfortable and itchy and it can make you feel self-conscious about the way you look.

There is no present cure for psoriasis, but there are a number of drugs and treatments that can relieve and control psoriasis, often for long periods of time.

It does help to use skin moisturisers to prevent the skin drying and cracking. They soften hard skin and plaques and may reduce scaling and itching. There are many different brands of moisturising creams and ointments. A moisturiser may be all that you need for mild psoriasis. Using a moisturiser may also mean that other topical treatments can be more effective. However, apply the emollient first and allow plenty of time for it to be absorbed into your skin before applying any other treatment.
Moisturisers can also be used in place of soap when taking a bath of shower as soap can dry and irritate your skin.

The treatment advised by your doctor may depend on the severity, site, and the type of psoriasis. Also, one treatment may work well in one person, but not in another.