Vitiligo is quite a common condition which makes the skin and sometimes the hair, turn white in patches.  This is because melanocytes, the cells which give the skin its colour have been damaged.

Vitiligo is not contagious. You cannot pass it on to someone else by touching them and it's not infectious. Vitiligo is considered to be an ‘autoimmune’ condition in which the immune system attacks the body’s own tissues.

The most common form of vitiligo appears in symmetrical form (generalised vitiligo) affecting both sides of the body. In some cases only one half of the body is affected (segmental vitiligo); this type has limited progression and is more difficult to treat. Vitiligo can spread to cover the entire body surface (universal vitiligo) but this type is not common.

The way the condition develops varies from one person to another and unfortunately it's unpredictable. Some people may not notice a change in their condition for many years whilst for others it can spread quite quickly.  In some cases, the white patches can regain their colour without the person having any treatment.  This is more likely with children. However, it's very unusual for the condition to be resolved completely without treatment.

At present, there's no 100% cure. Established treatments can be effective in re-pigmenting the skin, sometimes completely.  However, at present, there are no treatments that can prevent vitiligo developing again. 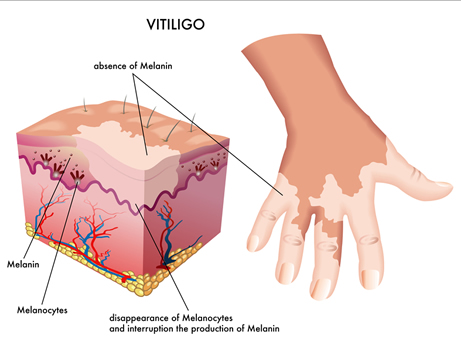 What are the causes of vitiligo?

The causes of vitiligo are not fully understood. Pigment producing cells (melanocytes) are not functioning properly in the white patches, although some of them survive, both in the skin and in the hair follicles of the affected area.  There are a number of theories to explain the loss of pigment; the most popular being the ‘autoimmune’ theory which suggests that the body’s own immune system is attacking the pigment cells.

The causes of vitiligo seem to be a mixture of genetic and environmental factors.  People with a particular combination of genes are more likely than others to develop vitiligo, but it's believed that some form of external trigger causes the initiation of the disease, such as:

How is this condition treated?

The most important treatment is to protect areas of vitiligo from the sun. It's very easy for areas without pigment to become sun-burned. This increases the risk of skin cancer. Wear sun-protective clothing and/or apply sunscreen with a sun protection factor (SPF) of at least 30 to areas affected by vitiligo.

Visit the AAD website for more information about Vitiligo.

← PREVIOUS
EARLY SYMPTOMS OF PHOTOAGEING AND A NEW TREATMENT OPTION

NEXT →
Welcome to the December edition of Dermacare Direct's monthly Newsletter